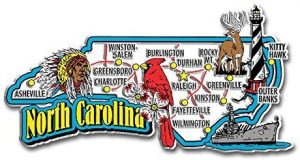 So, you’re tossing around the idea of buying a house in North Carolina so you can get in on the beach and mountain action, but you’re not totally confident in the process yet. No worries, cuz we’ve taken the effort of compiling this little guide to all things housing market in The Tar Heel State (boo-yah, one of their nicknames), to help you out.
That’s right – we’ll go through the important stuff we’d want to know if we were in your shoes, and even throw in some fun state trivia on top, for added flavor. It’s altogether a delicious recipe to get the inspiration wheels a’turnin’ AND get yourself more acquainted with your future state. So, less talkin’, more rockin’. Here we go.

Knowing the state you want to move to is just step one – you’ll have to narrow it down to a specific city next. This process can go a lot smoother (and not to mention faster) if you have some idea of the areas in the state that are the most/least pricey. That’s why we compiled a list of a few of each (as of 2019), just for you. Check it out.

And there it is. Now you’re well-fueled with knowledge that’ll help you keep the sensitive feelings of your wallet/bank account in mind when you embark on your house-hunting journey. Ahh, sweet victory…

Before you show up in North Carolina all ready to scout out your new house, you might consider checking out the current state of their housing market. Luckily for you we’ve got an overview of just that, coming right up.
There’s currently a lot of demand for houses, and not quite enough supply. It’s a seller’s market at the moment, and buyers should caution against taking their sweet time choosing their dream houses.

Where to Hunt in North Carolina

Great, so now you’ve got a clearer picture of WHERE to look for your house, but it might help even more to know how much the thing’s gonna COST. So, we’ll move right along to an overview of some home prices/values, just for you.
For starters, the median home value in North Carolina currently is $180,300. Home values have appreciated 8.6% over 2019 and are expected to rise another 1.2% within the upcoming year. The price of a home per square foot is about $130. Homes are listed on the market for an average of $260,000, and they’re closing for about $193,800.

Stock up on Hurricane Insurance in North Carolina

There are lots of reasons to be excited about moving to North Carolina, but something to keep in mind is that this place gets visits by some particularly grumpy guests – hurricanes. In fact, North Carolina is one of three states leading the nation in regular hurricane occurrences. So, it might not be too shocking that North Carolina is one of those 19 lucky states that require a hurricane deductible as a part of a homeowners insurance policy.
But what does that mean, exactly? Well, basically you’ll have to pay your insurance company a certain amount of money before they’ll cover any damage to your home dealt out by an angry windstorm. Deductible costs are typically about 1%-5% of the insurance value of the home, but it really depends on where you live, too.
For example, those living in low-risk areas in smaller/cheaper houses might pay $300 towards their deductible, while those living in high-risk areas in fancy mansions might pay $30,000.
No one likes hurricanes (or paying more insurance deductible costs), but if you’re REALLY concerned about them, you could always move to a state away from the coast. Areas further inland have a buffer of protection, but they also come with their own breed of risks. Nowhere’s gonna be immune to EVERYTHING.

…and Maybe Some Flood Insurance, Too

It’s no secret that temperatures and sea levels have been rising, plus North Carolina is located right on the East Coast, so it’s got that whole being-right-beside-the-frickin’-ocean thing going on. But while that’s a perk for beach lovers, it also means there’s a greater risk of flooding. So, you might need to tack on some flood insurance to your growing homeowners insurance policy.
If you live in an area deemed to be high-risk, your mortgage lender might require you to purchase extra homeowners insurance coverage specifically for flooding. But it’s important to note that even areas not in designated high-risk areas might still need it. Why? Because as that old annoying (but even more annoyingly ACCURATE) expression goes, it’s better to be safe than sorry.
Okay okay, so you might need it, but what exactly IS it? Well, broken down, flood insurance will cover your property (the actual structure of your home and the belongings in it – to an extent) if natural water (i.e,. rain, waves, etc.) wreaks havoc. Many policies will say that the water must cover at least two acres of normally dry land in order to qualify for reimbursement.
Check out your specific coverage, so that you’re SURE you’ll be good to go. Call up your agent and have a chat about what EXACT homeowners insurance you need, because you do NOT want to find out too late that you didn’t have enough. They won’t mind, and you’ll thank yourself later.

Quality of Schools in North Carolina

Those with an unquenchable thirst for knowledge might wanna know about the quality of the school system in their new state – so next up we’ll look at a snapshot, North Carolina-style.
Here are some 2018 WalletHub stats about how North Carolina schools ranked in the country:
#32 overall for the US
#32 for quality
#25 for safety
#5 for lowest median ACT scores
The top-rated schools in North Carolina are Raleigh Charter High School, in Raleigh (shocking, we know), and the University of North Carolina at Chapel Hill, located in (gasp) Chapel Hill.

Reasons to Move to North Carolina (…or not)

Alright, it’s time to move  the more-fun section of our guide now (read: “more” fun, not “SUPER” fun). Let’s take a look at some reasons why people would even WANT to move to North Carolina – but we’ll hear it from people who actually live here already. So, get ready for some heck yeah!s and some aww man!s related to North Carolina livin’..

Good weather: NORTH Carolina is technically located in “the South” (wrap your brain around that one), so it’s got that pleasant southern weather that comes with the territory. Locals say the climate is generally mild and temperatures hardly ever reach into the annoying range. Plus, the state’s got 300 miles of coastline on its eastern edge. There’s also a pretty epic mountain range. So whether it be beach or mountain weather that floats your boat, you’ll find it.
Good economy: The economy in The Old North State (watch out – it’s another nickname) ranked 18th in the country for growth. Lots of new job opportunities is certainly an enticing reason to move somewhere, and it’s just one of many reasons why so many people are flocking to North Carolina like it’s going outta style.
Good for millenials: Durham was ranked as the “best city for millenials in the U.S.” in 2018, by Growella. A couple of stats that influenced the ranking were the number of entry-level jobs available, how far a paycheck will stretch in the city, commute time, public transportation, and how many other “young people” live there. Check it out, millenials.
Good entertainment: There’s plenty to do in North Carolina. From beaches, to forests and mountains, to national parks, cool architecture and nightlife spots. There’s really something for everyone, so that whole “boredom” concept will be a thing of the past.

CONs (also from the mouths of 100% guaranteed North Carolinians):

Crime rate: A couple of areas in North Carolina cause the entire state’s crime rate to sit well above the national average. The city of Henderson, for example, has a crime rate that’s 139% above the national average, and the city of Greensboro has a crime rate that’s 52% above the national average. Many areas in the state are much safer, though.
Natural disasters: North Carolina ranks fifth overall in the country for the number of homes at risk for being hit by a natural disaster – including flooding, wildfires, hurricanes and tornadoes. Make sure you really do stock up on that insurance, if you buy a house here.
Allergies: Charlotte ranks as the third-worst city in the nation for annual allergy rates. Three of the state’s main allergens are mold, pollen and dust mites. The Allergy and Asthma Foundation of America ranked Greensboro at the top of their list for worst-ranking fall allergy capitals. Apparently the state is high in ragweed, another hugely common irritant for many Americans. Get yourself some nasal spray, if you’re North Carolina-bound.

Stuff to Do in North Carolina

Okay, since we now know WHY people move here, let’s check out a few specific examples of WHAT people do, once they become North Carolina-fied. We hit “redial” and chatted up the locals for a bit longer to find out some must-sees in the state.
Here are just a few of the state’s most excellent attractions:
Outer Banks: This 200-mile strip of islands off the coast of the state is one of the biggest tourist draws annually, with an reported three million-ish non-locals coming to check it out in 2015 alone. It’s said to be jaw-droppingly beautiful, and the perfect place to relax. There’s also a super-cool brick lighthouse, the tallest in the country, at Cape Hatteras. Your eyes will tear up from all the beauty.
Biltmore Estate: Located in the Blue Ridge Mountains just outside of Asheville is a massive, 8000-acre estate – the largest privately owned home in the country. Built between 1889 and 1895 by George Vanderbilt, the crazy-impressive structure has been making onlookers feel slightly inferior for more than a century.
Great Smoky Mountains National Park: The most-visited national park in the US is home to one of the country’s oldest mountain ranges. It’s jam-packed with wildlife and remnants of Appalachian Mountain culture. There are lush forests and fields full of wildflowers in bloom year-round. There are also streams/rivers/waterfalls and plenty of hiking trails (including a segment of the Appalachian Trail) and campgrounds. The highest mountain peak even has an observation tower for some crazy-epic views.
Pisgah National Forest: Another opportunity to soak in some of Mother Nature’s beauty in North Carolina resides in this half-million-acre park, which also features forests and mountains. In case you didn’t get enough hiking already, you can prep yourself for round two here.
Blue Ridge Parkway: It’s said that no trip to the state is complete without a ride on the Blue Ridge Parkway, which is 469 miles of wide vistas and tree-covered mountains. It’s even better if you do it on a motorcycle, or in autumn (super bonus points if you do it on a motorcycle IN autumn). It’s certainly something you’ve just gotta witness for yourself.

Settling down in the Beauty That Is North Carolina

Alright folks, there you have it – our behind-the-scenes look at North Carolina’s housing market. Clearly, we’re not able to get to EVERYTHING you may be concerned about before making such a giant move (we’re lost hiking out in the mountains somewhere), but here’s hoping that you’ve gained the inspiration/wisdom necessary to get started – and that maybe you’ve even learned a thing or two about the state.
If the sound of buying your new house in a state with epic islands, beaches and mountains sounds sweet, then let’s get busy! 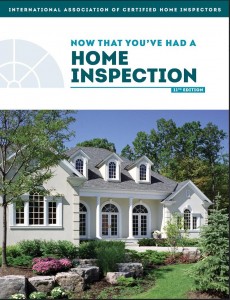 An inspection is just the start of keeping your home in good condition. With each inspection we offer a free book filled with home maintenance tips and other valuable information. Please contact us for more information.